Righteous among the Nations

Six young people each from Poland, Germany, and Israel examined the life stories of people who hid Jews during World War II and were later honored as “Righteous among the Nations” by the state of Israel, and looked into the ways in which these life-savers are remembered in the three countries. They visited institutions and memorial centers focusing on the history of the Jews in Europe, the Holocaust, or resistance against National Socialism, and analyzed the forms of presentation and educational methods used there.
The outcome of the project was a radio feature, a stage play, an exhibition, and a methodological workshop on working with biographies of the “Righteous” and with values such as civil courage, acceptance of minorities, and justice. The workshop was later carried out many times with school classes in all three participating countries.
Project organizers and partners: Edith Stein Society Wroclaw, Museum Otto Weidt’s Workshop for the Blind, Haifa Hillel – The Foundation for Jewish Campus Life, Konrad Adenauer Foundation, World Union of Jewish Students, Jerusalem.

The following encounters have taken place to date:

In 2006 the project was honored with an award from “Peace for Europe – Europe for Peace”. 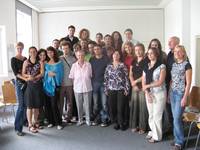